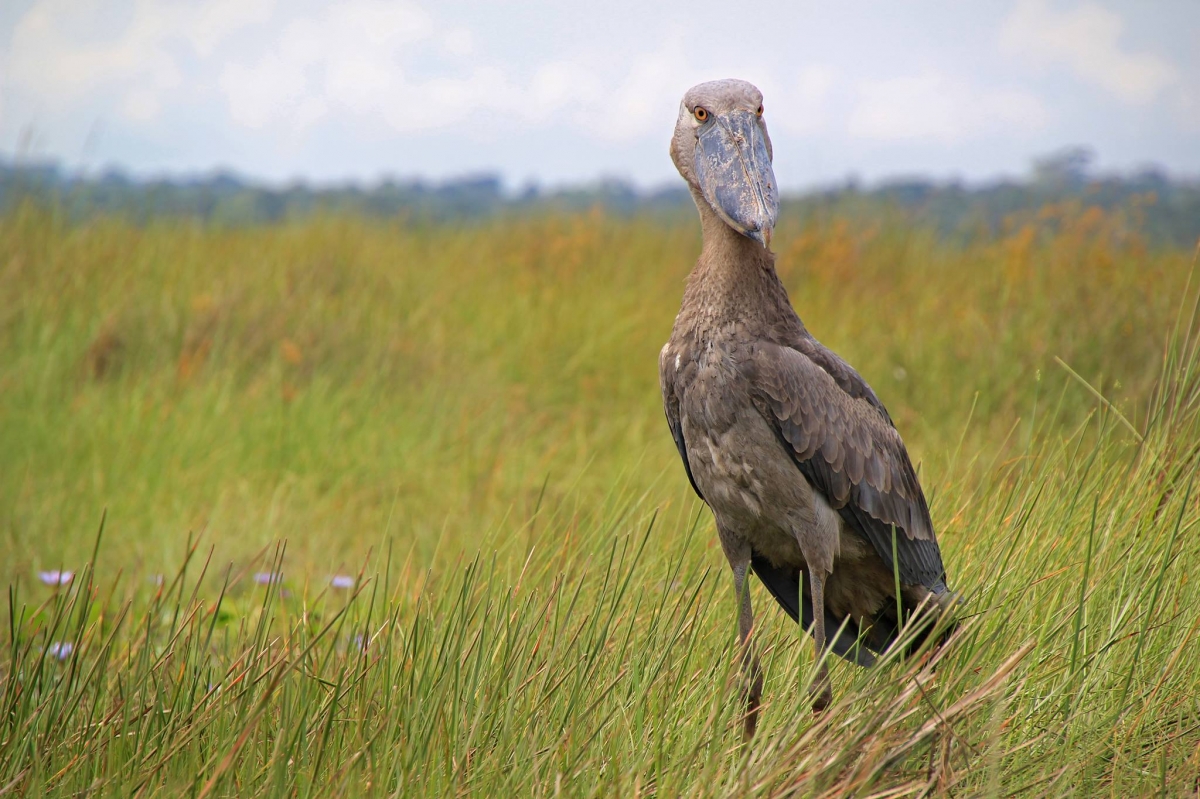 On arrival you shall be welcomed by your guide and then transferred to your hotel.

Early breakfast and transfer to Mabamba Swamp 50 kms west of Kampala. Bird watch en-route to the swamps looking out for papyrus specialties such as the Papyrus Gonolek, White winged warbler, Northern brown Throated, Weyns, Golden backed, Orange weaver to mention but a few. Move to Mabamba swamps most of the birding here is done canoeing as we look out for the rare Shoebill Stork, African Water rail, Allen’s and Purple Gallinule, Squacco, Goliath, Purple, Grey Herons, a variety of Egrets, ducks .

You shall drive to Bwindi. Bwindi is the Bird watchers haven! It holds 348 species of birds among which 90% of the Albertine rift Endemic are here such as the Short-tailed, Rusty-faced woodland and Grauer’s Rush Warblers, Bar-tailed Trogon, Wilcock’s Honey-guide, Yellow-eyed black Fly-catcher, Kivu Ground Thrush, Dusky Crimson Wing, White-tailed Blue Monarch among others, difficult or impossible to see in any other part of East Africa. An experienced bird watcher can identify up to 100 species in a day.

This morning you will report at the park office at 7:30 am, where you shall have a briefing as you get ready for the Gorilla tracking, There are now only 650 left in the world. The tracking may take between 2 and 6 hours with a park ranger guide interpreting the flora and fauna and the lifestyle of the Gorillas. In the afternoon you may relax at the Camp or (Optional) take a forest nature walk that will lead you to the Munyaga waterfall and a chance to see Primates such as the Grey Cheeked Mangabey Blue monkeys and others species.

After breakfast, you will drive to QENP with several bird watching stops and arrive in time for lunch. Later you will embark on an evening bird watching expedition and later return for dinner at the respective lodge.

Queen Elizabeth National Park lies on the floor of the Eastern arm of the Greatest African Rift Valley. Choose to bird along the Mweya peninsular for the Grey-headed Kingfisher, Swamp Flycatcher, Black-headed Gonolek, Grey-capped Warbler, Slender-billed Weaver and Brimstone Canary Or take an early morning game drive towards the famous Kasenyi track, winding through grassland dotted with trees and nearby crater lakes. Our main aim is to locate Lions and other mammals including Buffalo, Ugandan Kob, Oribi, Waterbuck, Bushbuck and family groups of African Elephants. Along the road you may find Scaly Francolin, Red-necked Spurfowl, several plovers, Harlequin Quail and Common Button-quail. Larks are numerous and include Rufous-naped, Flappet and the local White-tailed. Raptors include Martial Eagle, Banded Snake Eagles and Bateleur.
In the afternoon proceed on a boat trip down the Kazinga Channel. This area offers stunning views of Pink-backed Pelican, Saddle-billed Stork, Hammerkop, African Spoonbill, Yellow-billed Stork, Water Thick-knee, African Skimmer and over-summering Pale arctic shorebirds. Choose to have a game drive on the peninsular searching for Gabon and Slender-tailed Nightjars, as well as owls especially if you are staying at the Institute, or Mweya Lodge.

After breakfast you will drive to Kibale National Park. You shall have an opportunity to bird watch along the way as well as in the afternoon in the Forest.
(Optional: either Bird Watch in KIBALE NATIONAL PARK or SEMLIKI NATIONAL PARK)

You shall have a briefing at the starting point then start Chimp tracking which may take 2- 3 hours. Lunch will be organized according to the trend of the day’s activities, either picnic lunch or a hot menu lunch.
Later in the afternoon, you will have the opportunity of a guided walk through Bigodi Swamp. You may see Red Colobus Monkey, Grey-cheeked Mangabeys, Red-tailed Monkey and Galagos. The forest is also home to the Scaly Francolin, Marsh Tchagra, Black-bellied Seedcracker, Green-backed Twinspot, BicolouredMannikin, White-naped Pigeon, Afep Pigeon, Narina’s Trogon, Joyful Greenbul, Olive Long-tailed Cuckoo, Black Bee-eater, Blue-headed Coucal, Blue-breasted Kingfisher, Scaly-throated Honeyguide, Roufous Flycatcher Thrush and Black-faced Rufous Warbler.

After breakfast, drive to Murchison Falls National Park bird watching on the way, you shall carry with you packed lunch. This is a long drive with less birding.

Drive to Entebbe, with an opportunity to bird along the way. You may visit the Ziwa Rhino sanctuary (Optional), where the white rhinos which were previously extinct from Uganda, following the years of civil unrest, are being re-introduced, with an objective of transferring them back to the national parks where they originally were. You may be within a distance of 30 meters from these fierce animals which though have been semi-habituated.
Later catch a flight back home.