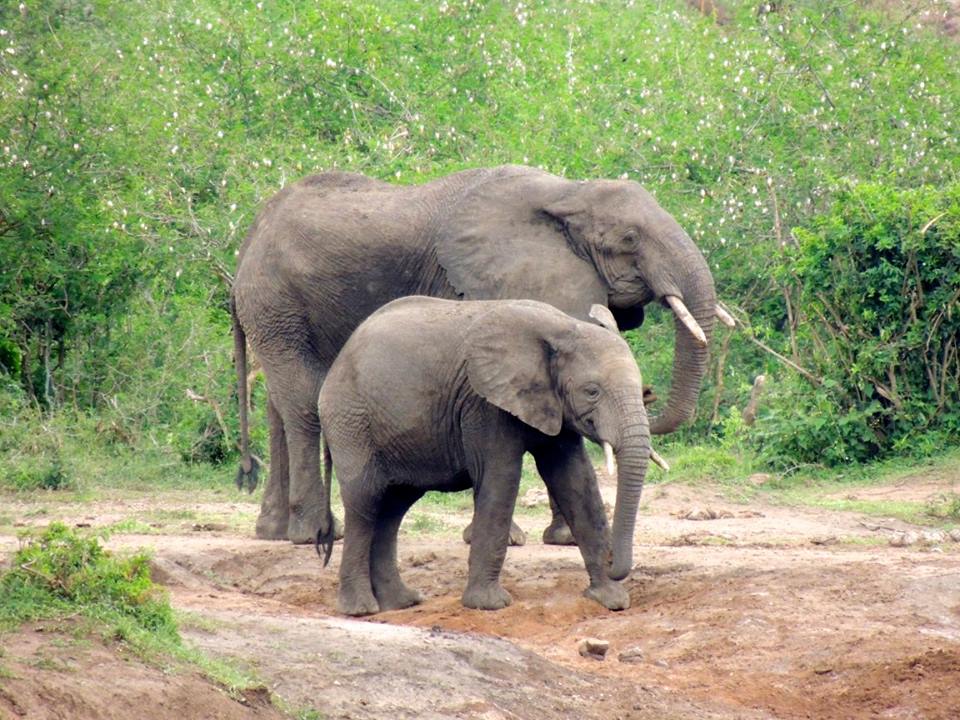 Briefing on the safari before we drive westwards towards Fort Portal to the Kibale Forest National Park (about 5 hours).

Traveling on both asphalt and unpaved roads, you pass through traditional Ugandan Villages where you see people at work tending their traditional crops of millet, sorghum, beans and maize. The lush rolling hills of this region provide good photo opportunities.

As you approach Fort Portal in the foothills of the Rwenzori Mountains, you enter Uganda's famous tea plantation region. A carpet of green spreads before you, as far as the eye can see, and seems an unusual contrast to the countryside through which you have just passed.

You arrive at Fort Portal, then, continue toward Kibale Forest, one of the great African rainforest research reserves. Years of study by scientists (who have cut a grid through the forest) have habituated many of its animals to human observers. This forest is famed for the variety of primates found here and it is a terrific area for birds. This rural Ugandan town (Fort Portal) is locally famous for its weaving and basketry, and we can spend some time briefly to examine some of this local art.

Fort Portal is a small and attractive city. The fort was built between 1891 and 1893 and named after Sir Gerald Portal, the British Consul General of Zanzibar who arrived in Uganda in 1892 to formalise the protectorate of Uganda. He died of malaria a few months after the fort was completed.

In the afternoon we visit a nearby forest swamp that is excellent for viewing primates and other forest animals. At the eastern edge of Kibale Forest is Bigodi Wetland Sanctuary which is maintained by the local community. You will expect birds like the great blue turaco, blue monkeys, baboons, otters, mongoose, bushbucks, bush pigs and among others.

Accommodation options available (all on full board basis)

Assemble at Kanyankyu River camp at 08:00 hours to go for the most popular activity in this park which is chimpanzee tracking.

Chimpanzees are man’s closest cousins though they are one of the most threatened primate’s species. More primates like black and white columbus monkeys, L’Hoest monkeys, grey-cheeked mangabey, red-tailed monkeys, bush babies, pottos and many bird species like the yellow spotted nicator, rumped tinker bird, little greenbul, green breasted pitta, the crowned eagle, black bee-eater and mammals like elephants can be seen in this walk.

Kibale National park, which averages about 3,300 feet in elevation, is an extension of the great rainforests of central Africa. It is inhabited by three large communities of chimps, each numbering more than 100 individuals. Each community has a complicated social structure. The big adult males dominate the group and defend the community territory against incursions by male outsiders; the females usually wander in small family groups.

Typically, we locate the chimps by listening for their pant-hooting calls, then hustle to the area from which they are calling. We get to observe them as they feed in fruiting trees, lounge, and socialise with each other, or even, occasionally hunt.

In the afternoon we shift to Queen Elizabeth National Park this morning (about 3 hours driving).

Leaving through Fort Portal town, you turn south and early this afternoon enter Queen Elizabeth National Park, which is dominated on its northern border by the snow-capped 16,000-foot Rwenzori Mountains - the famed "Mountains of the Moon".

This 767-square-mile conservation area is bordered on the north-east by Lake George and on the south-west by Lake Edward; its western border adjoins the Congo Parc Du Virunga. You will expect to see teeming herds of impala-like Uganda kob, as well as topi, elephant and lion, giant forest hog, Cape buffalo. There are also several soda lakes filling ancient volcanic calderas where flamingos reside seasonally.

We set out early in the morning for a game drive in the northern part of the park on the Kasenyi Track in search of lions, elephants, solitary buffaloes. This is the best time for opportunities of viewing the cats in action owing to the vast population of Uganda kobs. We have an excellent chance to view just about every animal here at very close range.

In the afternoon we will go for a launch trip along the Kazinga Channel. This gives you the opportunity to view wildlife up close: hippo’s huff and spray at a mere feet away from the boat, buffalo linger in the shallows. The shores of the channel are also home to an array of birds including pink backed pelicans, pied and malachite kingfishers, saddle billed stork and many others.

Mid-morning after breakfast we drive further south through stunning savannah grasslands as we head towards the breathtaking adventures of Bwindi Impenetrable Forest National Park.

Either (roads permitting) we will pass the southern sector of the park – Ishasha, a remote and beautiful extension of Queen Elizabeth National Park that is host to a large variety and volume of wildlife. (It is a fabulous site to see the lions draped from the trees and nowhere in Africa do you stand a better chance of seeing this than in the large low limbed fig tree of Ishasha). Or take the alternative route through cultivated expanses.

After breakfast, proceed for the morning briefing before enjoying the highlight of the trip - gorilla trekking, which may last the entire day.

We trek through the rainforest and bamboo covered slopes, accompanied by a guide and trackers, in search of a mountain gorilla family. The walking can sometimes be tough and long, but when you catch a glimpse of the magnificent silverback, any discomforts will be quickly forgotten. When sighted, visitors will be guided to within 6 metres from the gorillas, sit around them for a whole hour while gazing into their big round eyes.

Gorilla trekking is unpredictable. It's difficult to foresee how many hours you will hike. The gorilla excursion can take from 2 up to 8 hours. Expect to walk along distance in steep and muddy conditions, sometimes with rain overhead, before you encounter any gorillas. A good physical condition is recommended. For conservation purposes, time spent with the gorillas is limited to one hour. A ranger will brief you on how to behave with the gorillas.

While most of today's forests are no more than 12,000 years old, Bwindi's vegetation has been weaving itself into tangles over at least 25,000 years, in the process accumulating a lengthy species list. This includes 310 species of butterfly, 51 reptiles, 200 trees, 88 moths and an exceptional 120 types of mammal including 10 primates. The latter includes chimpanzee, L'Hoest's, red tailed and blue monkey, black and white colobus, baboon, and Bwindi's most famous resident, the mountain gorilla.

Bwindi is a prime destination for birdwatchers. Its 350 species include seven which are IUCN red data listed and 90% of all Albertine rift endemics, species which are difficult or impossible to see in any other part of East Africa.

Early breakfast before embarking on our return to Kampala, driving down the grassed and terraced escarpments of southwestern Uganda while taking in the breathtaking sights of the hills of the region dubbed ‘the little Switzerland of Africa’.

This area is a highly fertile, mountainous region with steep sided hills covered from top to bottom in neatly terraced cultivated rows. Not to miss as we traverse Mbarara are the impressing longhorn Ankole cattle. A remarkable highlight of this journey is the Equator line and surely you will cross it as we have a brief stop here.

We will be in Kampala in the evening before for your flight back home.