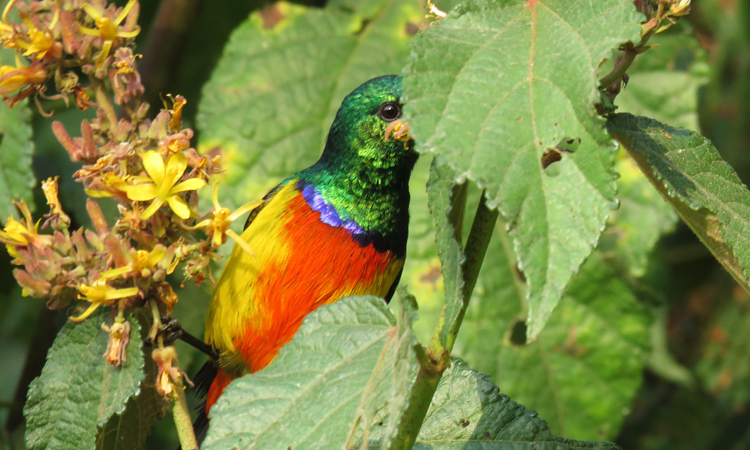 Arrival for tour and transfer to Nyungwe Forest Reserve

Nyungwe forest is situated in south-west Rwanda between Lake Kivu and the international border with Burundi. Nyungwe is divided north–south by a line of mountains that reach 2,600–2,900 m and which form part of the Congo–Nile watershed. As a result, Nyungwe is composed of two areas differing in pedology, vegetation, water-flow and biodiversity.

This wonderful birding area lies west of Butare, with the Butare to Cyangugu road passing straight through the middle, providing excellent roadside birding. A total of 275 species have been recorded in Nyungwe, reflecting the wide habitat diversity and altitudinal range.

These include, all the 25 species of the Albertine Rift mountains Endemic Bird Area that occur in Rwanda, Chapin’s Flycatcher and Rockefeller’s Sunbird (both globally threatened, restricted-range and biome-restricted).

In addition, 11 of the 23 species of the Guinea–Congo Forests biome and 71 of the 74 species of this biome of Afro tropical Highlands that occur in Rwanda have been recorded at this site. Generally, Nyungwe is certainly the most important forest for the conservation of montane birds in the region.

We have an early morning breakfast then set out to Uwinka for the Albertine Rift endemic birds search.

We try our luck and listen out at night fall for the Rwenzori Nightjar (a nocturnal species), Albertine Owlet and Red-chested Owlet.

The main activity today will be mountain gorilla tracking.

Mountain gorillas are the largest living primates and the world's most endangered apes with an estimated population of less than 800 left in the wild of the whole world and none in zoos. The mountain gorilla (Gorilla gorillaberingei), was not yet known to scientist until 1902. They are the next closest living relatives to human beings after the two chimpanzee species, sharing 97% DNA with us.